JANUARY 25, 2021, TORONTO — Tucows (NASDAQ: TCX, TSX: TC) today announced it has retired the software downloads site that started it all. TUCOWS, which then stood for The Ultimate Collection of Winsock Software, started on a library computer in Flint, MI in 1993. 28 years later, it served up its last software download.

What started as a place for people in the know to download software became the place to download software on the burgeoning Internet. The TUCOWS software library (rebadged Tucows Downloads in the 2000s) was “mirrored” by Internet Service Providers worldwide. Its importance in the early distribution of Internet software and in the history of the Internet itself cannot be overstated.

Much of the software that made up the Tucows Downloads library has been transferred to the Internet Archive, for posterity (https://archive.org/details/tucows). The Internet Archive is a cause whose good work Tucows actively supports. 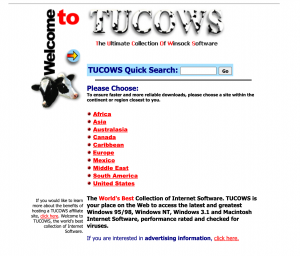 The TUCOWS homepage, circa 1998 via the Internet Archive

As Tucows has evolved as a business and as software downloading itself has changed, the software library that started it all has become much less relevant.

“For the past several years, history, well sentimentality, has been the only reason to keep Tucows Downloads around,” said Elliot Noss, CEO of Tucows. “Tucows Downloads has had an incredible run. Retiring it is the right move but that doesn’t alter the fact that it will always hold a special place in hearts and our story.

“We’re thankful to the thousands of software developers who used Tucows Downloads to get their software in front of millions of people, driving billions of downloads over more than 25 years.”

From humble beginnings, today Tucows is the second-largest domain name registrar and the largest wholesaler of domain names in the world with tens of millions of domains under management. The SaaS OpenSRS domain wholesale platform serves tens of thousands of customers including Shopify and other global website builder platforms.

Ting Internet is building fiber-optic networks all over the U.S. At the same time, Tucows is building the Mobile Services Enabler (MSE) SaaS platform that is powering DISH’s entry into the U.S. mobile market.

Tucows continues to grow and is hiring remote positions across the board. To see available career opportunities, please visit tucows.com/careers